Idle Idol is a clicker (sort-of) and resource management game about a goddess and her followers. Building temples or destroying obstacles will cost you some followers, but the temples will generate more over time. Manage your limited space around the statue to place temples. 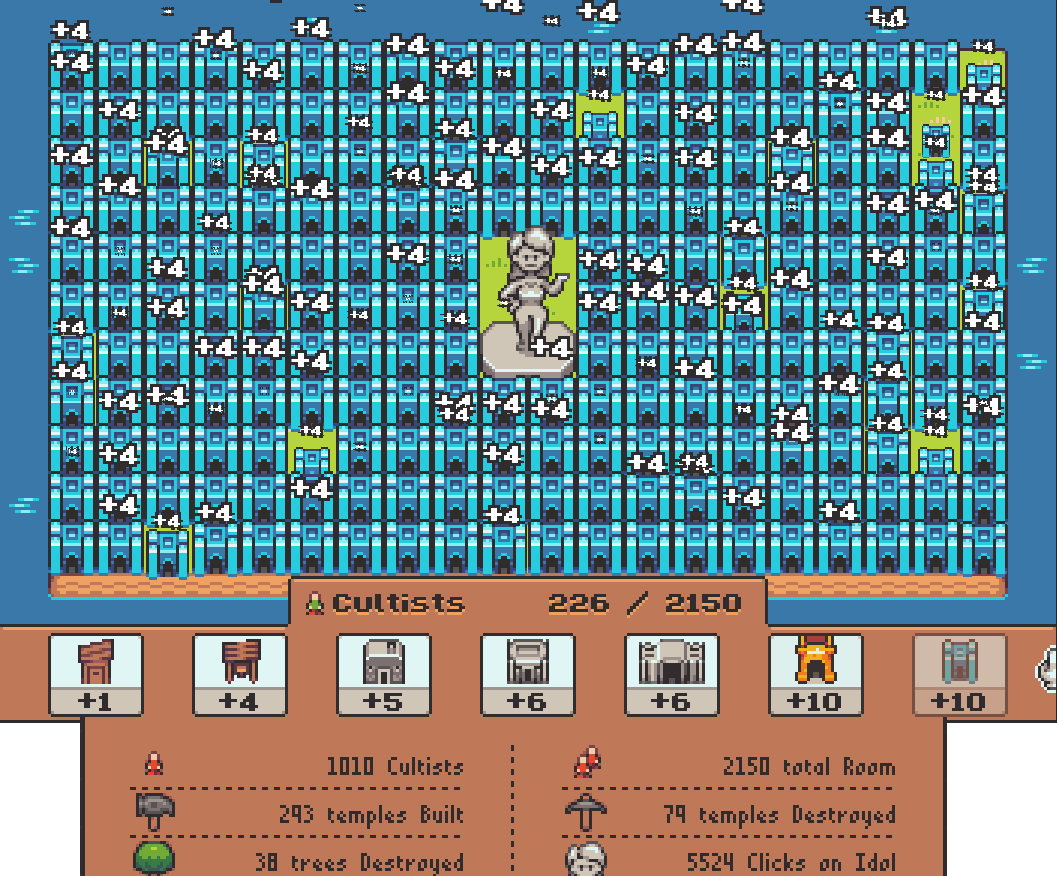 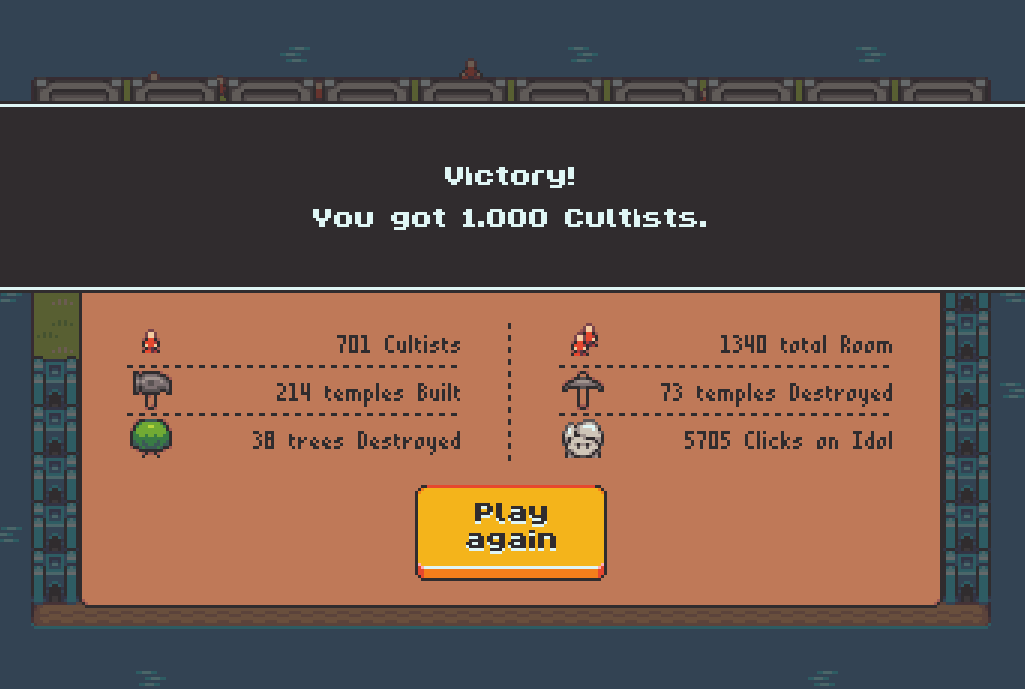 Idle? "Intense" is the word you're looking for. But jokes aside, it was pretty fun. Won on my 3rd try. It starts off kinda slow but it seems to get more and more intense. Could use a pause button. And it got me thinking there could be additional playmodes. One that is purely idle just for relaxation. So none of that "every cultists dies quickly". They'd just have to wait. One that is more on the strategy side. So the cultists don't die. But also, e.g. the area could be more limited and you couldn't just break down the buildings.

I click play again, apparently if you fast enough you can place temple from previous play.

it is a very very good game tho

I like it very much, thanks for the game 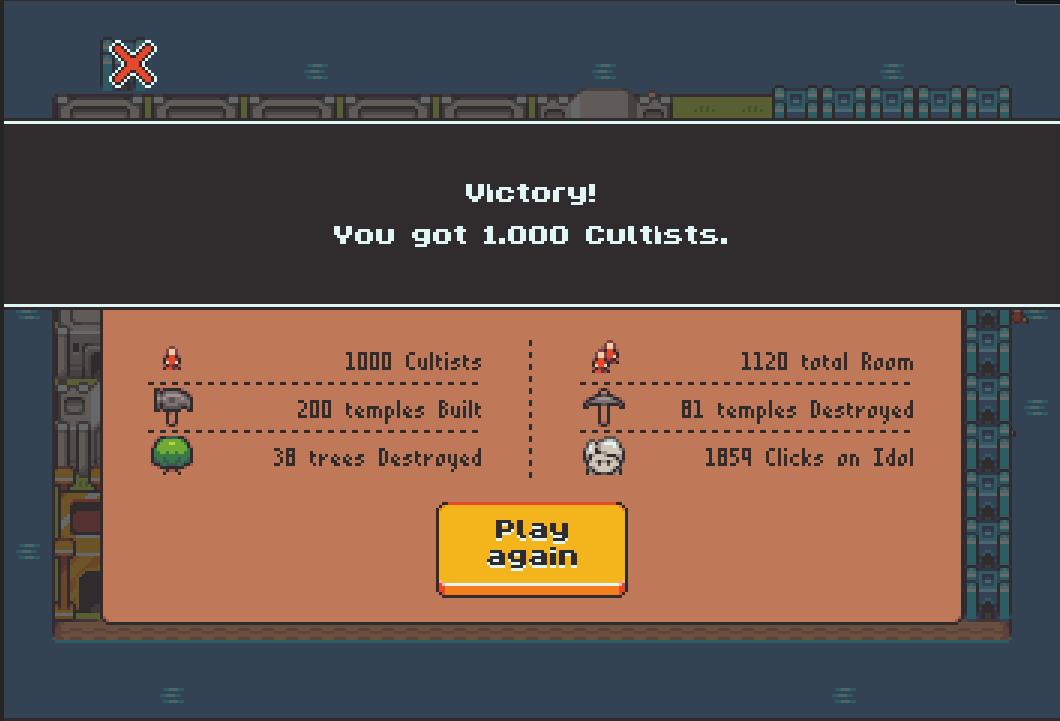 Not idle since you die in 3 seconds if you stop clicking.  The buildings could show size before you buy them for planning, I thought the 300 one would be 2x2

Great game!! That was fun.

Idle? More like frantic clicker :) Keyboard shortcuts for the buildings would have made this a lot less painful for the wrist. Nice though

you should add a pause button!

What is the benefit of the wide temple (the 5th building)? It seems to do the same as the previous building, except it's bigger. 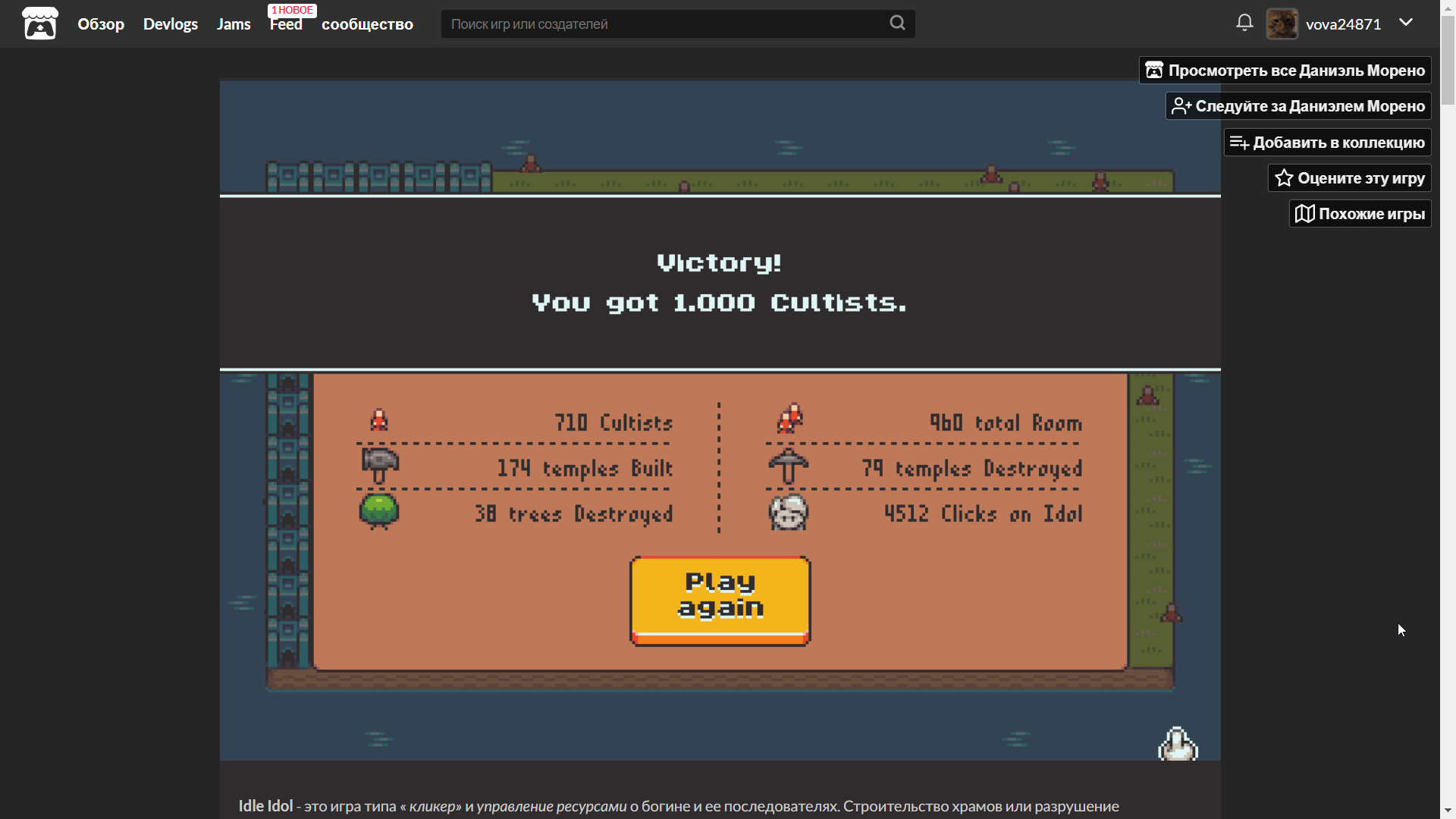 I'm not even gonna ask how

awesome game i completed it in 39 mins

It'd like it if you could change the building you were going to place if you accidentally clicked the wrong one, or otherwise change your mind about which structure you're going to place. I lost because I grabbed a large building that I didn't have the space for. I was so close to being able to afford the 300 building.

If I remember correctly, right clicking cancel the actual build.

Great clicker/incremental with a twist :D

Great fun, now i have another addiction besides heroin, crystal meth and crack, thanks!

I spent good time playing that game, thank you very much :)

LikeReply
penndemonium2 years ago(+1)
LikeReply
EA VS WALLET2 years ago 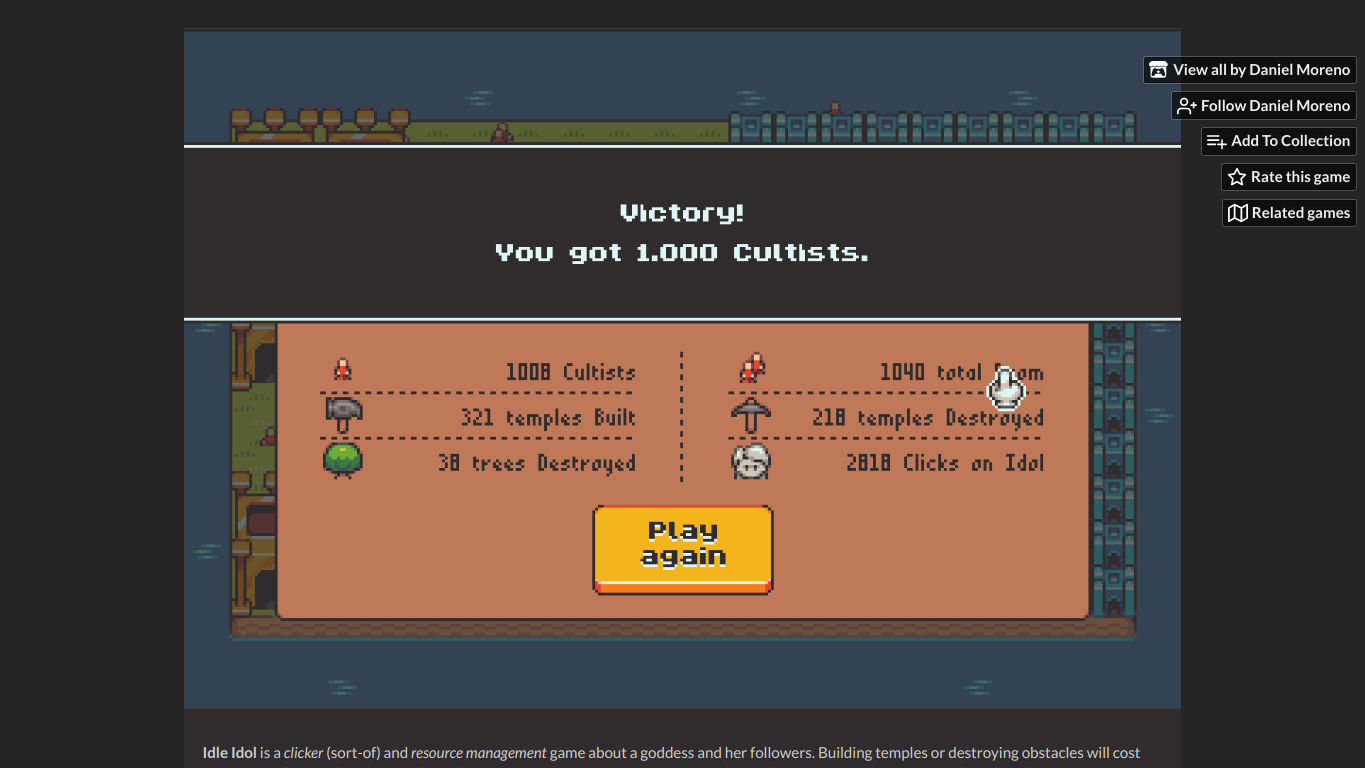 i did it at school

Great game!! clicker with a twist.... start peacefully and at the ends up frantic.

LikeReply
The GDWC3 years ago

Very nice game! I really liked the art style and the music reminded me of this game I played on nintendo DS when I was younger, called ninjatown :D The game itself was so much fun to play and it did get pretty difficult towards the end, the whole pace of the game just changed. Overall a very fun and enjoyable game :)

I don't know if you've heard of Game Development World Championship before (gdwc2019) but it's a competition for indie game developers where they can submit their games and it's free! It's great if you want some more visibility for the game and it only takes a couple of minutes to join :) 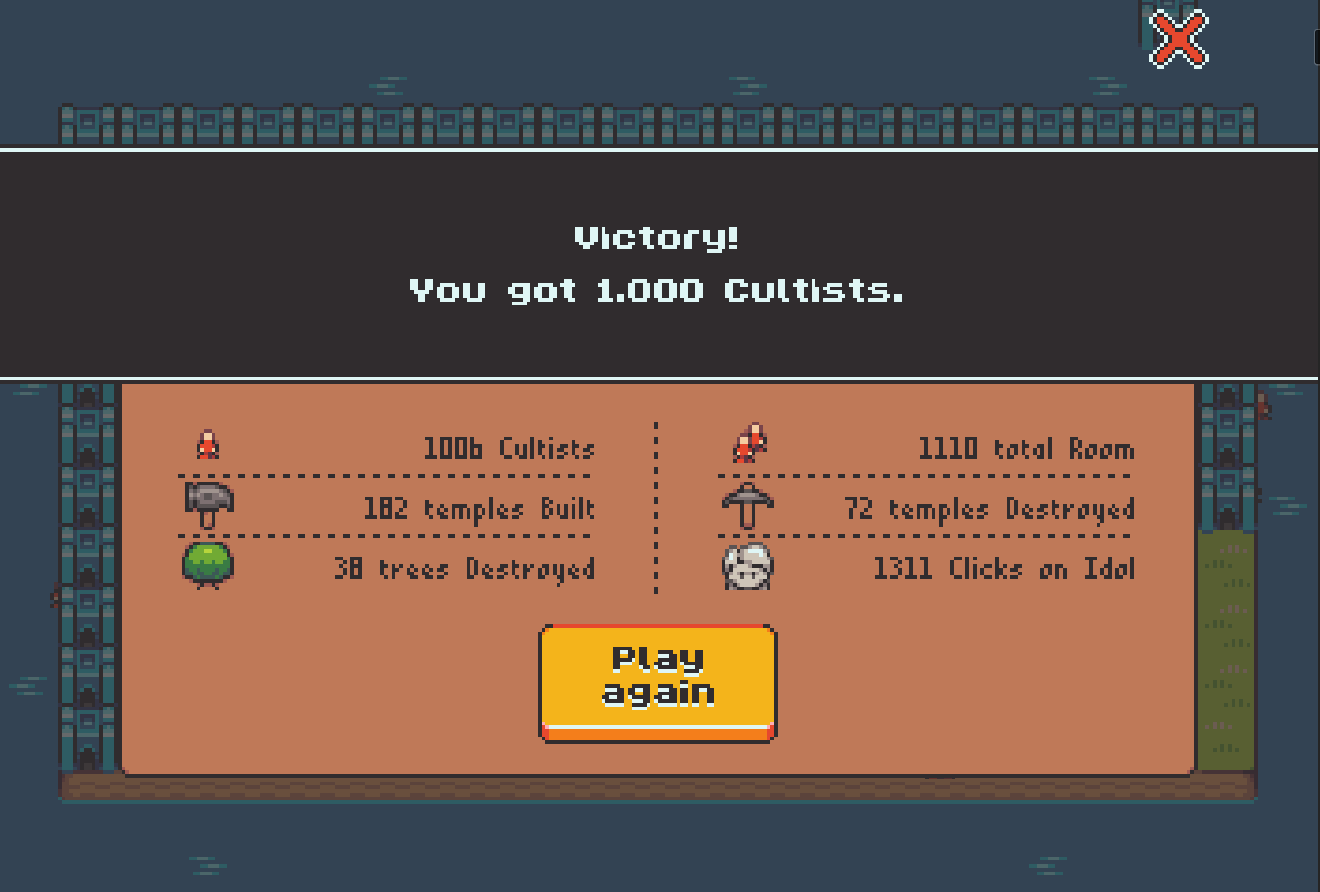 I would love if there were hotkeys for the buildings. It would make it easier than going down to click it every time!

realllllyyy nice ,thanks a lot, it made my hour :-)

A little short, but nice! Like the art and the idea is fun.

I was trying to fill my screen with blue houses, didn't expect there would be an end to this. 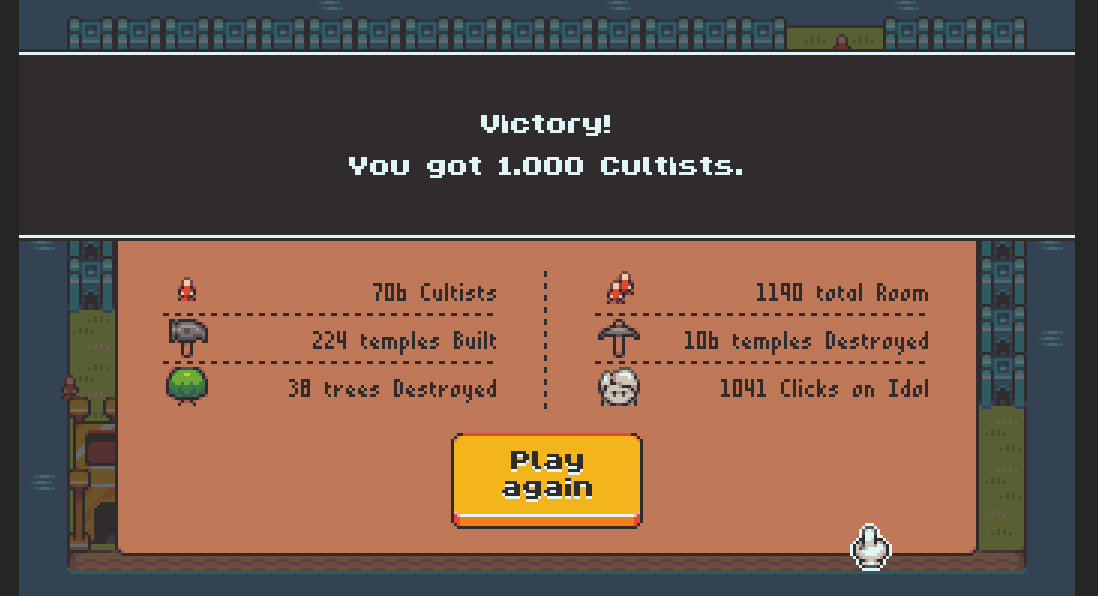 Me too honestly I wish there was a mode to slow down time so you could.

I killed my fingers.

good concept but now my fingers are dead

will be interesed if idol can be random with others random places (artic, desert, etc.)

Get concept from Forager?

Took me a little while to work out what to do but once I did I had a great time playing. Nice one!

Maybe it's just me, but this would be nice with a philosophical message.Like having the statue grow un-maintained as your cultists beat you in power.

The klicking Sound was a bit high pitched, and the spacing felt weird. Otherwise no Problems. Awesome Game :)

Also, how did you make your game fill up the screen, when we export unity web gl it's very small - https://gutpunch.itch.io/bloodclot

Thanks! And I'm afraid that I can't help you, I made the game with Game Maker.

Cult Challenge accepted and DONE! Sweet work in the jam. :) 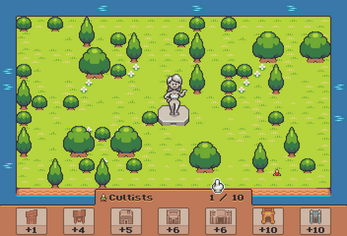 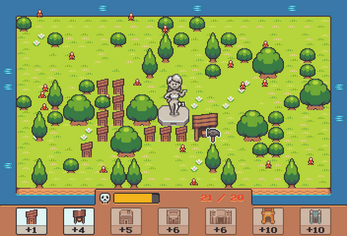 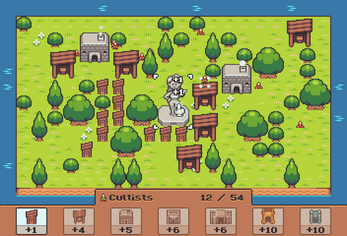